10 Year Plan in bullet points according to Ryan..

Disclaimer – I reckon the following is pretty accurate but..some settlement may occur 🙂

Leading by example/Cutting our cloth -‘Reimagine Local Government’ was tweaked (save more with less basically) and ambitiously agreed to investigate by our CEO.  This proposes an $83M reduction in operating expenses over the next 10 years! Council has to operate as efficiently as possibly so in the face of rates increases it is prudent that council as an organisation looks how it can deliver in the most efficient, cost effective and innovative manner whilst being ‘the best in the business.’

Councillors caught off guard “We were told our books were balanced”.  With the approved method we are but its not a sustainable means to continue using.

Also proposes immediate shift to capital value rating system (in line with most councils across New Zealand) as opposed to the current transition (7 years remaining).  This to capture full value of new titled sections (otherwise in effect like a manufacturer still selling items below true cost)

Introduction of a UAGC (Uniform Annual General Charge) to help mitigate the volatility of immediate shift to capital value.  Again a common rating strategy in NZ.  Not a rates increase but a part of existing rates values at approx. 15% across all rateable properties.

Elected members generally wanted to try and keep the rate increase to single digits and for one year only.

Live financial modelling was undertaken throughout deliberations to ensure the outcome would deliver a below 10% increase as this was the general mood across elected members and to limit it to a one year only increase.  To achieve this meant the debt to revenue ratio would come very close to our self imposed cap of 230%.  Not going over this is important to maintain our credit rating and so council can borrow at the absolute best lending terms available and leaves headroom for a civil defence emergency like an earthquake etc.  We had to also bring forward the capital value transition to capture the full rates income on new properties and also to ensure that our commitment for ‘growth paying for growth’ can be further realised.

We managed to keep rates increase to a one year only scenario of 9.7%  instead of the previously committed 3.8% or in average dollar to the average rates terms $194 instead of $76.

Settled on transition to a 3 year transition to CV – 4 years earlier than originally anticipated. Less volatility  then an immediate transition especially with retail centres and the potential cost passed on to shop owners.

This coupled with a phased in UAGC to mirror the CV transition and further mitigate rates volatiltity and prevent us having the highest rate peaks in the country.

This does mean balancing the books happens in year 4 of the 10 Year plan but drastically reduces the need to borrow to meet everyday expenses.

The Peacocke growth cell is still our preferred option to open up greenfield sections and realises the unique Government support of a 180 Million dollar interest free loan and approx. 80 million dollars’ worth.  Note that our infill growth is still one of the highest in the country and this is part of council policy to support 50% both green field and infill.

The full transport improvement programme in the draft plan has also been endorsed, funding three investment areas – managing congestion, improving safety, and supporting transport choices such as walking, cycling and public transport. More than half of the $251M programme is expected to be funded by subsidies from NZ Transport Agency.

The Central City Park – River Plan proposal – a vision to strategically purchase and demolish buildings to create a new park area and open Victoria St to the river went ahead.  The original quantum of 25M was reduced to 12M than to 7M.  At the moment this is largely cost neutral as existing tenancies offset the capex expenditure.  Our city has always had its back turned to the river and this forms part of a bold strategy to do something visionary.  I hope we can do something innovatively with the remaining properties with no money down.  We will see..

The long awaited Rototuna community hub with library and public square has been approved.  Land is to be set aside for a swimming pool operator of which there has been a lot of interest from providers.

Waikato Regional Theatre approved.  This is a very unique opportunity for the city as it only has to pay for about 33% of the project as Momentum in collaboration with other providers finds the shortfall.  It is important for the public to know that because a hotel will be building beside the theatre and the cost of groundworks is shared it was cheaper to build at the new site than the existing Founder’s site of which I was originally more fond of.

The talk of charging at the Hamilton Gardens raised a lot of interest.  The Hamilton Gardens Development Trust gave a very good submission and as such are spear heading a plan to bring back to council including raising 15 Million dollars from external funds and including seeing the gardens completed as per Peter Sergel’s vision within the next 10 years.

The 4 million dollar Garden Place upgrade  was never going to be popular except now a proposal is in place seeking external funds only which is great as no ratepayers funds then touched.

A further $760,000 has been allocated to develop a loop track, viewing platforms, toilet facilities, signage, fencing and bridges at Waiwhakereke Natural Heritage Park.

I was pleased to get support from elected members to get capital funding of $2.2M over the first three years of the Plan set aside for a new shared entry precinct for the Hamilton Zoo and Waiwhakareke Natural Heritage Park, with a request for staff to raise an additional $3M in external funding for the project.  With this improvement the zoo can be better recognised in the tourism industry and attract more visitation.  As it is also earning revenue this project is projected to pay for itself by year 7. 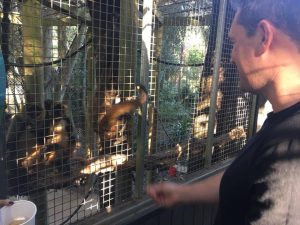